We'll start with Kyle. I've spent this entire spring break with him except for one day. He's been coming with me to work, running on the treadmill after I do, playing his video games (we won't say how much). We've had some struggles with some of his ADD issues. That is one thing I can't change about him. Help to control it though? Sure can. Through modern medicine and the use of some essential oils, I can SEE that we're helping him. Neither of those things changes who he is, or is a permanent fix for ADD, but I can see it helps him have some control over himself. It helps him succeed at school and succeed at home. He & I handled David's second seizure together as a team the other night while Michael was gone. I was so proud of him. He's growing up so fast (something else I cannot change!) 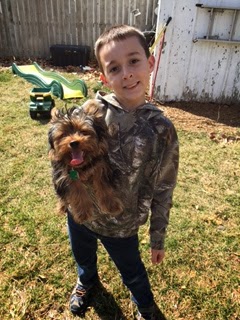 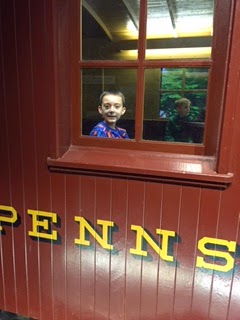 And speaking of David. Where do I begin??? I would love to change the new diagnosis of epilepsy. It sucks. It's scary and makes my heart race. I did a lot better during the second seizure than I did during the first one. But afterwards, I still fell apart. And I can't change it. It's part of him now and part of his label. I know that this diagnosis is just a small part of the bigger picture with him. Hopefully with medicine we can control these seizures and what they do to him.
His snoring has been an issue for the past several years. We're sure he won't sleep for a sleep study. We're pretty sure he wouldn't wear a C-PAP at night (although we might be able to get him to with some practice, luck & prayers). The doctor mentioned a tracheostomy. Which we're absolutely sure he wouldn't tolerate. So as of now, we're falling back on what we can try to control instead of change. Positioning seems to be the key to his snoring. If he's on his side, the snoring stops. So his new set up at night for sleeping can either be looked at as comical, crazy, or helpful. I'm sticking with helpful.
I can't change the prognosis we've been given for our boy. Twenty years with him just doesn't seem like enough time. So I'm just trying to control the quality of time we do have with him. And quite possibly by controlling and treating his symptoms, he could be with us for so much longer. 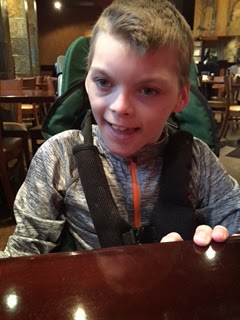 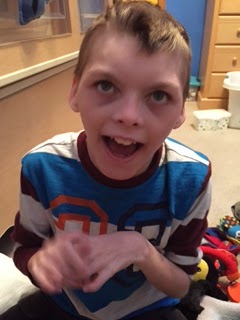 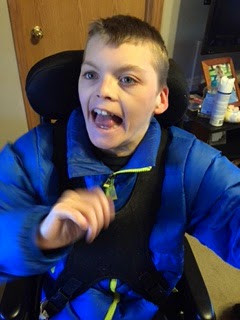 Then there's myself. I may not be able to change the world around me and some of the constants in it. But I can try to change me. I've been on the treadmill. A LOT. And I despise it. But I'm doing it to try to be stronger and healthier for my family. Kyle and I have taken the time to pull off some random acts of kindness over spring break. That helps me feel good about myself & what we're teaching Kyle. The emotional side of this life and the things going on had me so down for many many months. But thinking about that isn't going to change the outcome of what's to come. So I'm trying to focus on the good great things I have. Believe me. I'm still working on it. And will always be working on this last one. I really hope the changes will make us all better people.

Posted by Natalie at 1:03 PM No comments: