Most of you probably remember that we were able to get assistance in getting full exome sequencing done for David in the summer of 2015. We went in very optimistically after doing extensive testing for more than 13 years in hopes of finding an answer for David's apparent genetic disorder. We came away from that disappointed that there were no findings. It was just another hope crushed with nothing else to look forward to.

With time, I came to terms with the fact that we had no answer. I have been asked numerous times what David's purpose is. And I can tell you that a huge part of his purpose is to teach love, compassion, and differences to the rest of the world. I think we're doing that slowly but surely with every page view this blog gets.

This past fall our genetic counselor called me to tell me that as part of the testing process, the company we went through offers a "free" one year reanalysis on the sequencing. She asked if we wanted them to proceed with that. I said "sure" and promptly gave myself reminders that in the genetics world, one year is not enough time for research to discover many new things. We'd gone through extensive testing through all of David's life and had never gotten an answer that entire time. This time I had truly not even given another thought to the fact that they were re-running these tests.

At 9:35 this morning, my phone rang. I could see it was from Carle Hospital. I assumed it was the neurology office calling me about a few pharmaceutical needs that had come up for David. I was very surprised to hear the voice of our genetics dr of the last 14 years.

He said "My nurse just gave me the paperwork from the reanalysis and they found something." It took me at least a minute to process those words and another minute to get Michael to get a piece of paper and get that this was big. If you've ever been to a genetics appointment, you know that it's a complicated world where symptoms and features spill into so many different categories it makes your head spin. And if you've ever seen OUR geneticist, you know that he is a fountain of information and knowledge, thinks out loud, is extremely blunt, and speaks to you like a colleague. And is wonderful.
He said "David has You-Hoover-Fong Syndrome. It is extremely rare. There are only 6 other published cases world-wide. Three of those cases are siblings. I fully agree with these findings."

Say what?!?! So many emotions. Shock. Disbelief. Grief. Excitement. Wonderment. Confusion. So. Many. Emotions.

He was on the phone with us for a good 30 minutes. This syndrome affects the telo 2 gene and was just discovered in May '16. There is not a lot found about it on the internet. Believe me. I've been searching for things a good portion of the day. But the synopsis fits David to a T.

Here is the information describing many of the symptoms:

Now I know that is just a lot of medical jargon most of you probably don't know. I didn't know it until I started this journey with David. But they are all terms used to describe him. Every single time we go to a specialist. I have so many notes from doctors with these terms in there. The only thing that David doesn't have from this list is the heart malformations. It's scary how much it relates to him.

Some other news to go along with this HUGE revelation is that Michael and I are both carriers. We are so blessed to have Kyle be a typical child. Because we now know that our chances of him having this syndrome was 25%. We also know that Kyle is probably a carrier. And it will be between him and his wife to eventually figure out how they want to use this to approach the way they will have children. She would also have to be a carrier. Which the dr assured Michael and I that would be rare. But I also know that Michael and I found our way to each other and rare or not-we're both carriers.

My good friend, who has been on a genetic roller coaster of a journey as well, said to me today "Knowledge is power." She is so right. While this news really changes nothing. It changes everything. We have a name. A real, genetic name for something we've always known was there, but it haunted & eluded us until today. David will be part of something larger than what I thought his original purpose was. Not only is he teaching the world all those things I mentioned earlier, he will hopefully be able to provide some information for further research on this syndrome. Because to be only 1 of 7 known people world-wide to be diagnosed with this means that he will be published and be able to help find more answers to questions regarding YHFS.

There is so much more I could write, but it would be rambling. So I will leave you with this: 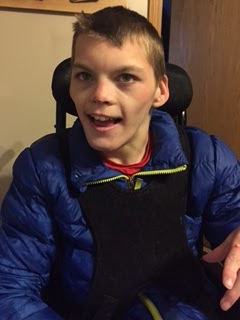 It's the same face and the same child who left for school this morning without a diagnosis. He is the same child. He just has new information added to his long repertoire of "stuff".  He will still go to bed as David and he will still wake up as David. I need to remember that before he becomes a case number in a research study. Before he is just a bucket of  "symptoms" to a researcher. He is a boy who just happens to have something called You-Hoover-Fong Syndrome. And while we're grateful to have a name for his symptoms, that's all it is. A name for his symptoms. Because his name is David Webb.